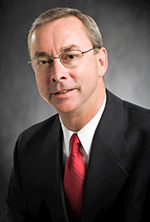 Mr. Anderson is a Past-Chairman of the National Alcohol Beverage Control Association (NABCA) Board of Directors, Past-President of the Multi-State Lottery Association (MUSL) Board of Directors, and a Past-President of the North American Association of State and Provincial Lotteries (NASPL) Board of Directors. He came to state service after twenty-six years in broadcasting, most recently as Vice President and General Manager of CBS television affiliates KBOI (Boise) and KIDK (Idaho Falls). Mr. Anderson received his Bachelor of Science, Business Administration degree from California State University, Chico. He is the father of four children, grandfather of six, and resides in Boise, Idaho with his wife of 40 years, Theresa Anderson.